In 2011, Tim Cook, the CEO of Apple, announced that 16 billion songs were downloaded from iTunes.  Arabic music is also sold on iTunes, but the amount of pirated songs available for download on Apple’s digital media store is staggering and raises a question of why the American company is turning a blind eye on this thievery.

According to the Apple website, “someone with signature authority should apply to sell music on the iTunes Store.  Only that individual can accept the standard iTunes Store contract on iTunes Connect.”  Apple also states that a contract is required and territory rights must be cleared before it is made available for sale.

Searching for Arabic music on iTunes makes it clear that this policy is not enforced when it comes to sellers of Arabic music.  Shady, so-called, label companies are selling music by Arab artists from the legendary Fairuz to Elissa, the best selling female artist in the Arab world, without any clear or declared consent from recording artists, composers, or copyright-holding companies.

The album review on iTunes is plagiarized from a review by John Storm Roberts.

For example, an unknown company called, Bringlns Music, is selling an oddly titled album, Exquisite Lady Fairuz that includes 16 Fairuz songs.  The album, which was never released by Fairuz or the Rahbani Brothers, sells for only US $6.99.  Even the album review is plagiarized from a review by John Storm Roberts, the world-music scholar.

The Egyptian singer, Angham, is also being pirated, this time by Megastar.   An album titled, The Complete Collection, offers 141 songs by Angham, basically her repertoire of songs, for a hefty $54.99.  The album even includes non-recorded songs, which Angham sang during a television appearance on MBC’s “Dandana.”

Arabian Legends, another seller claiming to be a legit company, sells for $14.99 an album of 28 songs performed live by Elissa on tour even though the Lebanese diva has never recorded a live album.

Najwa With U, an album supposedly released by Najwa Karam herself, includes 15 mobile ringtones, including some that are not even hers, like ringtones of Nancy Ajram songs.

Jasmine Music sells a compilation of songs from three different Kadem El Saher albums that were released by Rotana.   For the cover, Jasmine Music also ripped off one of the Rotana covers, using the same photograph of El Saher and the same design but blatantly cropping off the Rotana logo. 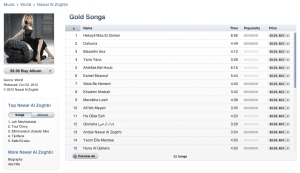 Gold Songs, an album selling for $9.99, features 32 songs by the Lebanese super star, Nawal Al Zoghbi. However the songs on the album are owned by two different record labels, Alam el Fan and Rotana, but the two companies have never conjointly released a Nawal Al Zoghbi album so what is this album doing on iTunes?

It is clear that Apple is not too concerned with piracy of Arabic music, but it seems neither is the Arabic music industry itself.  Obviously Arab media conglomerates, like Rotana, are doing little to nothing to fight piracy.  Instead of dropping popular singers, like Sherine from its label due to alleged low sales, Rotana needs to fight back against music pirates like the ones on iTunes who are selling, without their approval, Sherine’s library of songs for $24.99.

The least Rotana and other Arab record companies can do is “play” the religious card and launch an extensive anti-music piracy campaign aimed at making illegally downloading music not only socially unacceptable but regarded as sin against one of God’s commandments.  Surveys conducted in 2001 (Bareet), 2003 (Moaddel and Azadarmaki), and 2004 (BBC and Inglehart) found that more than 95% of Arabs believe in God.  Yet ironically, Arabs disregard God’s eighth commandment of not stealing and continue to download pirated music, primarily because they do not regard it as an act of stealing.   It is the music industry’s responsibility to eradicate music piracy, and they can do that by educating the public.

Also, label companies, artists, composers, lyricists, retailers, and managers must come together and form a Pan-Arab entity that monitors piracy of their music, including on iTunes.  Together they can file class action lawsuits against not only iTunes but also websites such as the ad-supported Nogomistars, 6arabyon, and Mawaly that illegally offer free downloads and streaming of Arabic music.  On Mawaly, for instance, Elissa’s latest album was streamed for free 153 million times, a staggering number in comparison to the sales figures.

One thing the Arab music industry can do immediately is back the Beirut-based, Anghami, the region’s first legitimate mobile and web music streaming platform and the only “legal alternative to piracy.”  Anghami offers listeners access to licensed music, both Arabic and international.  At least, it is a start!

Welcome to my corner. You won't find any sacred cows here. Everything is subject to ridicule - except my mother.

chic and classic fashion style
To Be Aware

It's all about disbelieving your thoughts

Taking over the world and leaving it ruthlessly alone

The World of Special Olympics

A Quiet Place For Stories & Poetry

The greatest WordPress.com site in all the land!

This WordPress.com site is the bee's knees